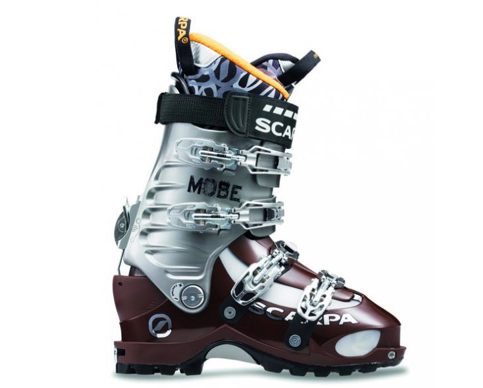 The Scarpa Mobe boot was lust-worthy when it arrived. It is quite well made, and a lot of attention has gone into designing a boot with a fair amount of lateral stiffness and a nice, progressive forward flex. It also felt light in my hand out of the box. I was excited to test this boot and I quickly developed high hopes for it – to the point that I was dreaming of getting rid of my alpine boots and just skiing the Mobe every day. For me, that is saying something, since I’ve never been impressed enough by any touring boot to consider skiing in one all the time. Touring around my living room in the Mobe, the walk mode certainly seemed adequate. The boot has significantly more articulation than the Black Diamond Factor or the Salomon Quest, but it offers slightly less range of motion than the Dyanfit Titan. I found myself walking at only a slightly diminished stride in this boot compared to a true backcountry boot.