The Upslope features both diagonal and A-frame ski carries. The A-frame carry features fixed bottom loops on the outside of the hip pockets that spread the tails of your skis out, making sure that you never tag one walking.

[David: The Upslope features the best A-frame functionality I’ve seen from a backpack. Not only is full access to the main compartment maintained via the zipper around the back panel, the helmet carry placed on the bottom of the outside means that it isn’t stuck between the ski A-frame. Avy tools are also accessible with an A-frame in place. The only downside I’ve noted is that the magical volume and convenience of the hip pockets is cut by 50% by the skis entering the carry straps. The diagonal carry solves this, as does rigging both skis together on one side.

While I really hate diagonal ski carries in general, and don’t fully understand why you would opt for them over A-frame, the Upslope does have one of the more intelligent systems I’ve seen. The bottom loop is easily adjustable without having to find any secret pockets like some other packs I’ve used, and the top strap stows away in its own pocket when not in use. This top strap also can clip directly to the shoulder strap of the pack, which helps pull the skis in to your body, instead of dangling off the back of the pack—a hallmark of diagonal carries.

These straps can also be re-routed to carry a snowboard vertically.

The helmet carry stows away into its own zippered pocket, and folds either up to the back of the pack, or down to the bottom, giving you a few options to stow your lid. It also does a great job of holding a sleeping bag if you’re thinking about pushing the Upslope into duty for some longer trips.

The ice axe attachment is sleek and simple. There’s just the old standard loop at the bottom of the pack, and then the top diagonal carry strap secures the handle of the tool. It works well on a traditional axe, but isn’t so secure with technical tools.

The first time I put on the Upslope, I felt like I was much more in the pack—as opposed to it hanging on my shoulders. The hip pockets give a lot of support and help keep weight low. On top of that, the main pocket is fairly low profile, so the overall effect is kind of like being hugged by a tiny baby Koala bear. Of all the packs I’ve used, the Upslope 35LL does the best job of simply disappearing while I’m skiing in it. It stays put, and doesn’t joggle—even on bigger impacts and compressions.

My first time out with the Upslope, I found myself skiing more confidently than I ever have before with my camera on my back. I’m used to it banging around, constantly reminding me that my life’s savings is bouncing just inches from my back, ready to explode in a crash. For the first time, I’m now comfortable jumping off of bigger hits with my camera on my person, and I’m no longer tempering my decisions with that variable.

Even fully loaded, the Upslope carries more comfortably and less obtrusively than any other pack of this size that I’ve used.

For many people, the Upslope 35L may be overkill as a day pack. The 20L version has most of the same features and pockets at a lower weight and price. So if you’re used to skiing with a pack in the 18-25 L range, I’d highly recommend checking it out.

Those going on longer expeditions with more climbing gear and technical tools may find the Upslope’s gear attachments to be inadequate, and its volume too small (as David notes below). But the Upslope performs very well as an everyday touring pack for the average skier. Its volume is adequate, and the fact that it lacks some of those more technical features means that it’s a very simple bag, without the mess of straps and attachments found on many more technical packs. And that simplicity means that I’m planning on using the Upslope for day hiking and shooting mountain biking this summer.

[David: Despite its marvelous A-frame abilities, the Upslope is not what I would deem a technical pack. Ice tools won’t sit well, there are no lower compression straps, and you’d be hard pressed to strap crampons to the outside. The hipbelt, because of the pockets, lacks some of the activator straps common to most technical bags. It was not designed for particularly heavy loads. If you’re the sort of person looking to carry a pile of technical gear, or your skis A-framed with boots in the bindings for summer snowpatch hopping, my hunch is that you’ll be better served by a pack with a bigger hipbelt and some kind of aluminum frame to keep the weight transfer happy.]

I’d agree with David there, and if you’re looking for a pack with the features David mentions, at the expense of those hip pockets, the Gregory Targhee 32 is a great option.

For anyone looking for a relatively simple but remarkably functional pack, the Thule Upslope 35L is the best pack we’ve used. It has some unique features that set it apart from the crowd, especially for photographers. 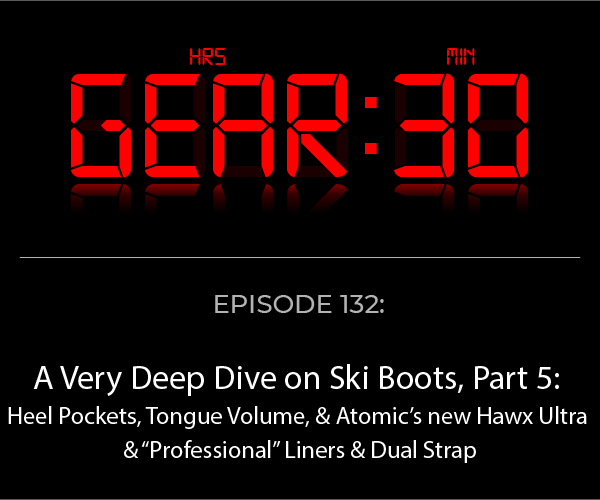