Internal cable routing is becoming more and more common on mountain bikes, and I wish it would go away.

Sure, it maybe looks a little cleaner, and I’ll admit that if it’s implemented well it isn’t all that hard to set up. But it’s still a case of making something functionally worse for the sake of aesthetics, and I don’t have much patience for that.

Let’s lay out the reasons why internal routing is fundamentally a worse option:

(1) It’s still more work to set up. Now, as I said up top, it doesn’t require that much more time and effort than external routing, provided that the internal routing is implemented well. Granted. But for one thing, it often isn’t. I was working in a bike shop back in the days when internal routing first started appearing on time trial bikes, for aero reasons. Those bikes were a nightmare. Fishing cables through unguided ports with tiny openings often took hours, and housing lengths needed to be set with millimetric precision to stop cables from snagging and binding.

And while things have improved (at least on mountain bikes — I haven’t touched a TT bike in probably 15 years), it’s still not always smooth sailing. Some routing just requires weird bends inside frame tubes that are hard to get housing to follow. Other times ports are tiny and inaccessible. I once spent a very frustrating evening trying to fix a friend’s bike in a hotel room after one of the housing guide tubes on their bike came dislodged inside the frame, such that the tube guided the housing well away from where it needed to exit the frame. There’s just more possibility for things to go wrong and turn into a nightmare — even if most of the time it doesn’t.

And there are still downsides if things do go well. In particular, it sucks whenever you need to install or remove a brake — you need to disconnect a brake line, cut off the old fittings (thereby shortening the hose), and install a new barb and olive. While you can definitely successfully bleed a brake on a bike, it’s often easier to take the brake off to get the hose oriented vertically and get every single bubble out. If you damage something on a trip it’s a whole lot nicer to just need a multi-tool and a few zip ties to make a brake swap. And in my case, as someone who’s constantly swapping parts on and off various bikes to test, dealing with internally routed brakes just means more time, more effort, and more money spent on replacement parts for no good reason. 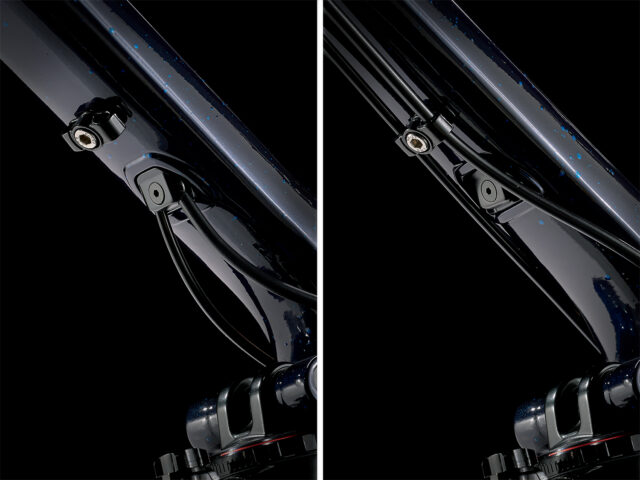 (2) Internal routing can be noisy. Especially on bikes that forgo fully-guided routing, it’s very common for cables to rattle around inside frame tubes and make a racket. Sure, you can take steps to mitigate the noise, like adding foam housing dampers around the cables, but it’s still more effort and expense to deal with. I’d be more willing to deal with internal routing if it was annoying once, when first getting set up, but having a noisy bike so that it can look 0.004% better (that’s the exact number, I checked) is unacceptable.

(3) Even if you have the most dialed, fully-guided routing that addresses my complaints about setup and noise (though the brake hose thing still stands) it still poses a problem: what if you want to run your cables differently than the frame designer intended? You’re hosed. (Sorry.) Maybe you run your rear brake on the left side of the bar; maybe you prefer to run the cables on the same side of the headtube as the controls that they’re attached to. Whatever the case, with external routing you can generally swap locations around and make something work. If your routing is dictated by where the tubes are running through the frame, you really don’t have any choice.

I’m not saying any of these issues are total showstoppers, and internal cable routing wouldn’t stop me from buying a given bike if it was what I wanted otherwise. And I’ll also grant that internal routing (at least through the seat tube) does make sense for dropper posts, in order to simplify their inner workings. I can also get on board with routing the derailleur housing through the chainstay to protect it from chain slap and keep things quiet. But overall, internal routing is just a case of making things worse for aesthetics — and I don’t even think it’s much of a visual improvement. My new Nicolai G1 has the brake hose and derailleur housing routed very, very externally — way out on the outsides of the downtube — and you know what? It looks fine. It’s quiet. And it’s incredibly easy to work on. Maybe it’s just the grouchy mechanic in me talking, but seeing well designed external routing makes me happy, and there’s undoubtedly a sort of beauty in that.

So what do you think? Am I just a grouch, making a mountain out of a molehill, or is internal routing an unnecessary scourge being pushed on us for no good reason? Let us know in the comments.

10 comments on “Debatable: Internal Cable Routing Isn’t Worth It”