I ran these for half a season on a 7” shuttle bike. There’s not a whole lot of variation from a basic mushroom pattern, but the rubber is pretty firm which I really liked—it has a much more solid feel than some of the other really soft shroom patterns. Soft mushroom grips feel all cush and cuddly with dry hands in a garage, but sweaty palms stick better to something with a little more meat. These have it.

My biggest gripe with the Free Agents was their diameter. These are thick, and I prefer thinner grips. So they’re sitting in a box waiting to go to one of my friends with big paws.

Free Agent is a BMX company whose logo I’ve seen on quite a few catalog parts (pedals mostly), so I’d be surprised if the exact same grip wasn’t available with some other company’s name on them. These are freaking cheap though as branded by Free Agent, cheap enough that it’s not really worth looking too hard // looking to find them elsewhere. 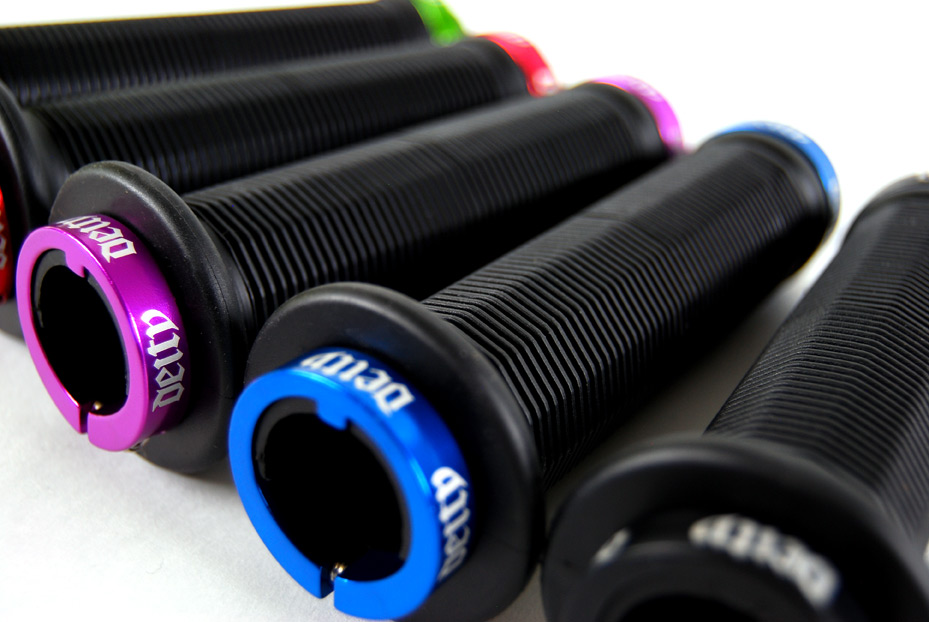 I had a pair of used Enokis handed to me a few years ago by a buddy. And to be honest, I don’t know why I haven’t bought more of them. They’re like a thinner version of the Free Agents. They’re made of a pretty stiff rubber compound, coupled with narrower outer and crushed diameters. I’ve ridden these things in 100 degree temperatures, and they work better than anything else I’ve tried.

I do wish they were a tad thinner, but next time I need grips, this is what I’m buying. The Enokis can get a little slick, but they don’t get to the non-functional level no matter how hot it gets.

Unless you’ve been living in a hole somewhere, you probably know that Cameron Zink sells grips. When these first came out years ago, I just figured he and his brother Howie had found some catalog piece from a BMX supplier and put their name on them. That may be the case, but I can’t find the same grip under any other name. This may really be an original.

These are the only grips that I’ve ventured to put on my trail bike. (They’re also sitting on my DH, dirtjump, and 7” travel shuttle bikes.) Why?

They’re thin. The lock-ons are the thinnest lock-ons I’ve ever seen, and that’s the main reason that they’re currently sitting on every bike I own.

Plus, the pattern works. Just yesterday I rode them in a torrential downpour on one of the rougher descents in Tahoe. (Yes, I rode Toad’s in a lightning storm, it was epic yo!) They did feel slick with a casual grip, but even completely soaked, ‘real riding pressure’ kept them from getting slippery.

And as thin as they are, they’re also still really comfy with gloves on. I wish I’d had gloves in the rain, but I wasn’t stressing without them.

The non-lock-on version is even thinner, and I’ve been digging those on my dirtjumper. The ribs are pretty soft, but the wavy pattern does something none of these other grips do: Even when crushed, it makes a kind of irregular series of ridges on your hands that does work a little better. It’s certainly something you can feel.

I think my ideal setup would either be (1) a Sensus grip with a little stiffer rubber or just thicker ridges, or (2) a Deity Enoki that was a little thinner. Those two are my top two picks for someone who likes thinner grips.

Forget your gloves on a road trip and want to roll bare? Those Lizard Skins Chargers are probably the most likely to be found sitting in a mountain bike shop somewhere.

Given these options, I won’t be riding with gloves on anything outside of a long trail ride in some really hot, humid conditions.

And rainstorms count as humid conditions.

I’ve just got to remember to stick the damn things in my truck.