Trade show season has come and mostly gone at this point, and Interbike Reno has just finished. The big change this year was the move from the neon wasteland of Las Vegas to the biggest little city of Reno, a place that’s full of exciting eateries and drinkeries, most of which are boarded up and guarded by three men that collectively have five teeth.

I kid. Sort of. Reno seems alright, but it doesn’t quite have the faux glamour of the Vegas strip. I’ve yet to decide if that’s ultimately a good or bad thing.

But I digress. Back to bikes.

As seems to be the running annual theme of these Interbike write ups, the show is yet again smaller this year. The Outdoor Demo took place at the Northstar bike park, which has awesome trails, but also made it tough to spend much time on many bikes. But we got a few interesting rides on bikes from Pivot, Canyon, Mondraker, Nicolai, and some others — we’ll be posting initial reviews of those in the coming weeks.

The show itself was in the Reno-Sparks Convention Center, and was both smaller and a bit different than the Vegas shows of yore. While lots of things were more or less business as usual, here are the eleven most noteworthy takeaways, products, cool things, and trends we noticed at the show:

Interbike has been called (by a few extraordinarily witty internet commentators) Inter-eBike. Because, in recent years, there have been so many eBikes at Interbike. Like I said, it’s quite witty.

The difference this year isn’t that there are fewer eBikes (there are still plenty of them, possibly outnumbering the pedal bikes). It’s that they’ve been largely segregated into their own room, off to the side of the show.

It strikes me as a recognition by at least part of the industry that eBikes are a different thing than pedal bikes. And brands like Pivot (that’s producing their own eBike, the Shuttle) are pushing a service that helps new eBike owners find legal places to ride them. From a trail-access perspective, I think that’s a great step in the right direction.

Jamis has not been a brand that I’ve gotten particularly excited about in… a while. Maybe ever. But they have two new bikes that look legitimately interesting: the 27.5” wheeled, 160mm-travel Hardline, and the 29” wheeled, 130mm-travel Portal.

Both bikes are using the new “3VO” suspension linkage, which creates a virtual pivot point that stays roughly in line with the chain to keep things efficient, while having a second linkage that actuates the shock. I’m always interested in new suspension designs, and this one looks like it could work well. Both the Hardline and Portal will be available in aluminum in the near term, with carbon options coming in the future.

Geometry on both bikes is pretty standard for their respective travel classes, so it’ll be interesting to swing a leg over them. We’ll report back when that happens, but until then, here are some pictures from the show floor:

A few companies have new helmets. A Trail helmet from Alpinestars, a DH helmet from Leatt, and the most interesting one I saw — a new Trail helmet from Oakley. The Oakley helmet has a latching mechanism to hold your sunglasses when not in use, and it has a cool-looking gasket thing to keep sweat out of your eyes. And the visor goes into full Enduro mode:

Despite all the carbon at the high end and plastic at the cheap end, I’m still a sucker for nice machining. This stuff isn’t really new, but here are some pictures of hubs from White Industries (that we reviewed a while back), some hubs with speed holes from Onyx, and a forged but not yet machined chainring from Praxis.

Shimano has a new “BMX Specific” pedal — the PD-MX70 — that looks like it could be great for more aggressive mountain biking. It has an extra nubbin of plate underfoot that prevents the cleat from rolling into a release, which should prevent any unwanted unclipping during hard cornering or tweaked out jumps. Basically, if you’re the kind of person who finds themselves maxing out the tension on Shimano pedals to keep from releasing at the wrong time, these might help. 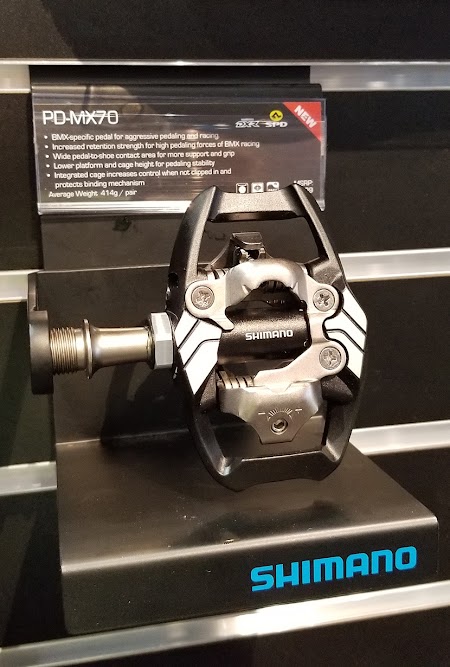 Want to know how most wheels get built? They’re laced in this machine:

Would I prefer a handbuilt wheel? Absolutely. No Question. But the machines are still cool to watch.

A few companies were showing single bike racks, because carpooling is for losers. Here’s the Transfer 1 from Kuat:

As I noted in my Kuat Pivot review, the new swing-away attachments for hitch racks are kinda awesome. And Thule is now offering one too:

Maxxis tread patterns are staying pretty much the same (with the addition of the Rekon Race and Assegai, which were released earlier this year). But there’s a new casing coming down the line, called the Exo+. It’s beefier than the standard Exo casing, but not as burly as the DoubleDown casing. Basically, it’s an Exo casing that also has SilkShield under the tread. It’ll be around 40 g heavier per tire than a normal Exo casing, and it’ll be available in the DHF, DHRII, and Rekon to start, with more options to come in the future.

And the other addition to the Maxxis lineup (and one that I’m particularly excited about) is broader availability of the 3C MaxxGrip compound. MaxxGrip is a softer, grippier rubber that used to mostly be found on tires with a DH casing. Now it’s available on DHF’s and DHRII’s with DoubleDown and Exo casings. In other words, I can run sticky rubber on the front of my Trail bike without a big weight penalty.

As much as anything, Interbike has become synonymous with weird, vaguely bike-related junk. Here are some random pictures, and a quick video of the always entertaining bike-testing circuit.