For the 21/22 season, Head announced a new lineup of “Performance” all-mountain boots, the Formula (which return for the 22/23 season). The Formula lineup consists of the Formula RS (~98mm last boots) and the Formula (~100mm last boots), with a variety of men’s and women’s models.

Head designed these boots to showcase many of the technologies from their high-performance Raptor series, but with more comfortable, accessible fits. The aspects of comfort they focused on include their Form Fit shell, which is fully heat moldable, their Perfect Fit 3D liner, which is also heat moldable, and an extended toe box from their latest Raptor mold. The Formula RS and Formula series are both offered in a full range of flex offerings, including five women-specific models. We’ve been testing both the Formula 130 and Formula RS 130, but while we spend more time in them, we wanted to discuss some of the details of these boots.

What Head Says about the Formula series:

The Formula series is “hard-charging and easy fitting.”

“We took everything we learned from making the fastest boots on the World Cup circuit and have brought it to the mainstream. Features like the Spineflex buckles and extended toe box are borrowed straight from the legendary Raptor. When you design and build high-performance racing boots for most of the world’s top race athletes, you’ve already got half the Formula. We’ve used advanced materials and a more refined design to reduce pressure points, and increase support. With an adaptable PU shell that features new cuff alignment adjustment and the deep heel pocket and extended toe box increasing torsional rigidity for better edge precision. HEAD’s full suite of customization technologies, including Liquid Fit, Form Fit and Perfect Fit 3D liner, bolsters FORMULA’s precision credentials further.”

While the Formula RS 130 and Formula 130 are both substantially lighter than the Head Raptor 140, they are still notably heavier than several other 130-flex boots in this category, given the rise of lightweight alpine boots. This is particularly interesting since Head’s previous “performance” all-mountain boots, the Nexo LYT, were some of the lightest alpine boots on the market. With the Formula boots, Head aimed to gain more torsional rigidity and overall support, relative to the Head Nexo LYT, while also not being as heavy or burly as the Raptor boots. The end result is that the Formula boots’ weights end up being similar to some of the more “traditional” (i.e., not super light) alpine boots on the market, such as the Lange RX and Tecnica Mach1 series, but not as heavy as some “recreational race” boots like the Atomic Redster CS and Head Raptor 140.

Head built the Formula series with 100% polyurethane, but it is still a fully heat moldable shell through their Form Fit technology. Head recommends visiting a bootfitter with a proper molding oven to get the boot heat molded. It is an option to foam and pad the more voluminous parts of the foot to create extra space in these zones during the heat molding process. For proper reaction of the Form Fit shell, Head recommends heating to about 80° C for 12 minutes.

Thereafter, any boot in the Formula series is receptive to stretching to create additional space-specific zones.

The Formula RS and Formula boots’ liners include several options for customization. They utilize the 3D Perfect Fit Liner in all models, which is listed as a 100% customizable liner through heat molding. They also include Liquid Fit in nearly all the models (aside from the Formula 100 and Formula 85 W), which is Head’s technology for taking up volume in a liner by injecting a liquid material into flow ports around the heel and ankle. The Liquid Fit technology has been utilized in many of Head’s all-mountain boots for several seasons, and is intended to be a flexible, comfortable material that helps to fill volume around the heel and ankle pocket.

The liner of both the Formula RS and Formula are both quite dense, and not very minimalistic. There seems to be a significant amount of denser foam situated in the heel and ankle pocket, so between that and the option for adding additional volume with Liquid Fit, it will be interesting to see how they hold up over time and how customizable they prove to be.

Head’s Formula boots, with their stock stated forward lean of 9º (without a spoiler), are fairly upright compared to other all-mountain boots. According to Head, after adding the included spoiler, both the Formula RS and Formula effectively become some of the more forward boots out there, with a stated angle that Head is calling 16°.

The Formula series is built with Head’s Spine-Flex alloy buckles (as we’ve seen on their Raptor boots), and all four are micro-adjustable. 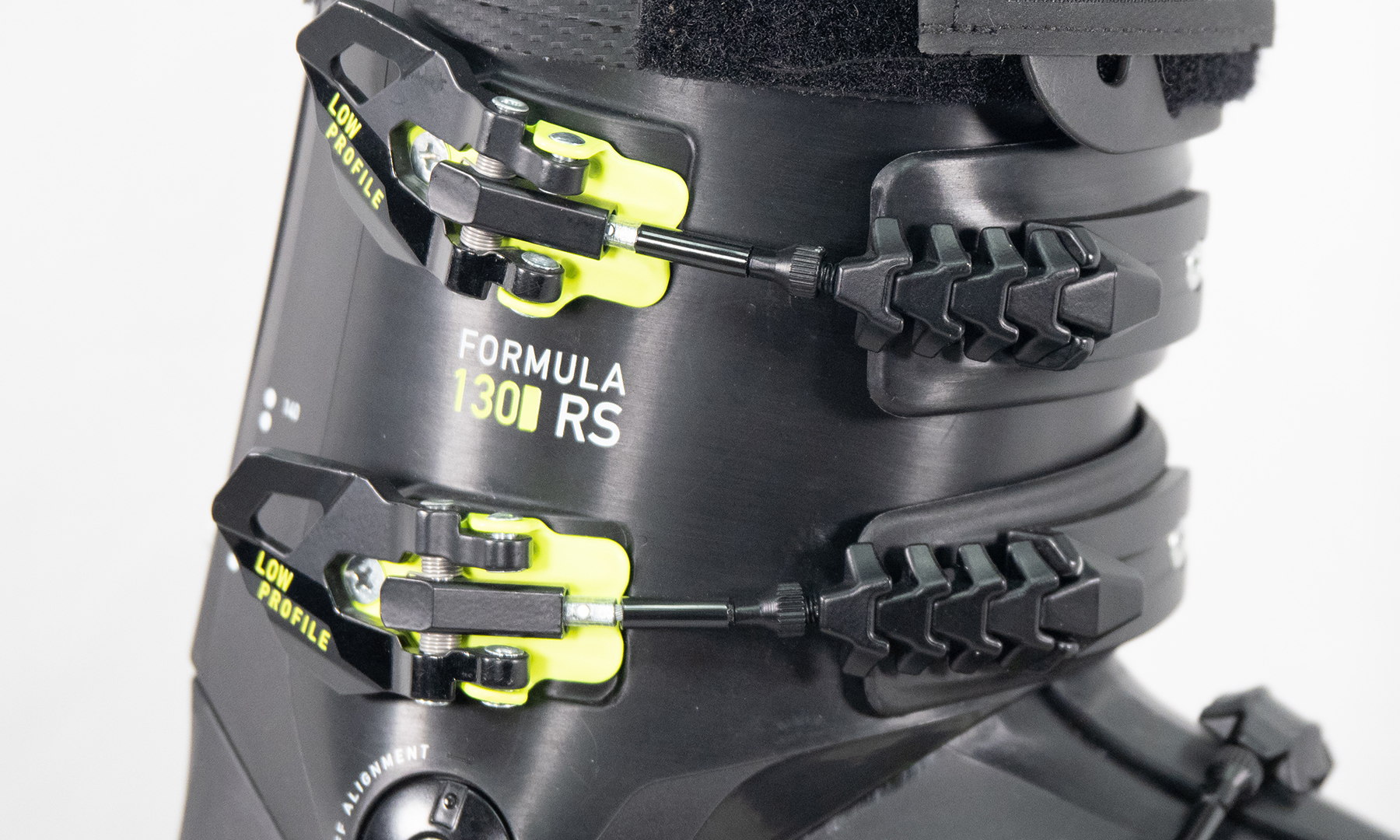 The spine-flex is a unique buckle closure, and is intended to distribute pressure more evenly when cinched (relative to a traditional buckle). Overall, these are pretty low-profile buckles, though we’ve found them to be a bit trickier to really cinch down (particularly on the cuff) due to the short length of the buckle lever.

The men’s Formula 130, Formula RS 130, and Formula RS 120 feature a 50 mm Velcro Strap with Head’s “Power Plate.” The Power Plate is a plastic piece that sits between the shell and strap and is designed to help distribute pressure across the shin and provide better power transfer.

More time in the boots will help determine the level of increased performance from the Power Plate. One related note: the Formula 130 and Formula RS 130’s power straps are attached to the cuff via rivets, so it will be a bit trickier to swap an aftermarket power strap if you decide to do so.

The Formula RS and Formula series come stock with replaceable ISO 5355 Alpine soles. The sole is a hard plastic that isn’t super grippy, but so far, hasn’t created any problems when walking to the lifts (if you’re used to traditional flat, plastic alpine soles, these are totally fine). There are a few models of the Formula series on Head’s website that come stock with GripWalk soles, and all of them feature replaceable soles with the option to purchase GripWalk soles aftermarket.

The Formula series boots offer dual cuff alignment on both sides of the cuff.

As always, our “Fit” sections will never replace the usefulness of the advice of an experienced bootfitter, nor are they designed to do so. The fit of any boot is the deciding factor and everyone’s feet are different, so we highly, highly recommend visiting a bootfitter before settling on a boot. With that said, here are some of our thoughts on the fits of the Formula RS and Formula boots.

Head focused on extending the toe-box of both their Raptor series and the new Formula boots by 12 mm, which is a comfort-oriented change that is easily noticeable in both boots. The Formula RS and Formula were built with new molds from Head, intended to provide more comfort than the Raptor series while still delivering performance.

Dylan Wood: The Formula RS has a pretty typical low-volume fit, with no weird points of pressure or any other surprises. The heel area feels a bit looser than some other unmodified LV boots (the Atomic Hawx Ultra 130 S GW and Tecnica Mach1 LV 130 were boots I A/B’d the fit to), but Head’s Liquid Fit should be able to fill this void a bit. The toe box also stands out, as it does feel a bit longer than other 26.5 LV boots (specifically around the big toe and second toe), but not much wider at all. The instep feels similar to other 4-buckle LV alpine boots, perhaps a bit lower. I’ve gotten along well with this boot out-of-the-box, but again, that’s just me, and unless you’re my long-lost identical twin (or clone?), you don’t have my feet.

Luke Koppa: Compared to other ~100mm-last boots, I’d say the Formula has a slightly roomier than average midfoot, whereas its ankle / heel pocket is maybe a touch on the lower-volume end of the spectrum. I have a low-volume ankle, low instep, and wide midfoot, and in the Formula 130, I don’t get any pain around my midfoot (which is rare for me) but I also have a bit more room than I need around my ankle and instep. It feels a hair wider around the midfoot compared to the Tecnica Mach1 MV 130, but roomier around the ankle and higher over the instep.

The Head Formula and Formula RS represent a major shift for the brand’s “Performance” alpine boots, transitioning from the extremely lightweight, fairly soft Nexo LYT series to more traditionally constructed boots with the high-end features we’d expect from performance-oriented alpine boots. We’ll be spending more time in them through the rest of the season, so stay tuned for updates. In the meantime, Blister Members can read our initial impressions of both the Formula 130 and Formula RS 130 in our Flash Review linked below.

Blister Members can read our Flash Review of the Formula RS 130 and Formula 130 for our initial on-snow impressions. Become a Blister member now to check out this and all of our Flash Reviews, plus get exclusive deals and discounts on skis, and personalized gear recommendations from us.